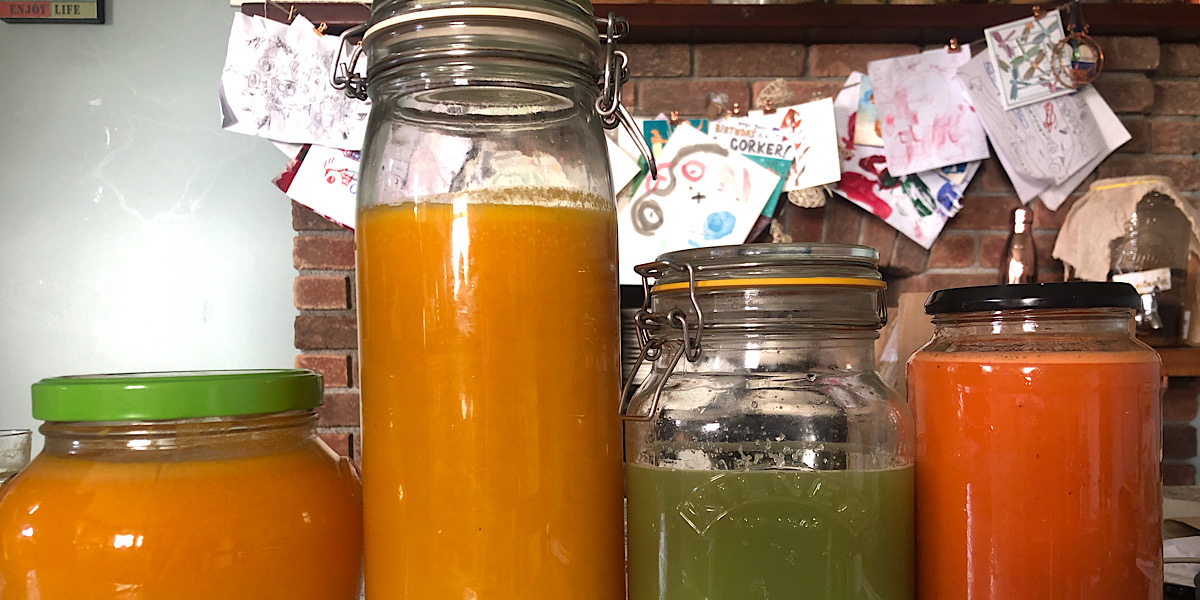 Note to the reader:

I am not qualified to give anyone any dietary advise. What I am sharing below are my personal experiences and thoughts. It is up to you to do your own research and decide what is best for you. If you would like to learn more, you will find links to helpful resources at the end of this article.

Why I decided to go on a juice fast

As a yoga teacher and a practitioner of over 2 decades, being healthy has always been my passion.  And I thought I was doing pretty well as I rarely got even a cold. My diet was mostly vegetarian, with occasional fish.

Then in May 2018 my right eye started to hurt and turned red.
After a few days of putting tea bags on it, I ended up in an eye emergency in Dublin and was diagnosed with something I have never heard of – anterior uveitis. I was put on copious amounts of steroid drops for 2 months and injected with something to detach my inflamed iris from my lense. It was a frightening experience.

I was told that this condition was ‘autoimmune’ – cause unknown in 50pc of cases. I was told that it would likely come back. It did come back three times since then.
And each time my vision would worsen somewhat. This year in Spring I was told that they would refer me to a specialist, who would manage my uveitis. The word ‘manage’ did not sit well with me at all. I did not want management,
I wanted to get to the bottom of this.

How I did it

I was aware of people doing long juice fasts and benefiting from it immensely. Now I had the motivation to do it, and see if detoxing myself would help heal my eyes.

I had already acquired a good masticating juicer (Omega) and the time had come to really test its worth. I was learning by listening to people such as John Rose and Nathan Mulder.

I decided to start at the beginning of May, hoping for lot of sunshine and warmer temperatures. I was aware that I would get cold on juices.
I didn’t put a date on how long I was going to do it for, I was just going to play it day by day.

I calculated how much nutrition I was going to get through different types of fruits and veg. I decided to have orange juice as my main source of nutrition. I am not going to go into details on this (please listen to the links below) but the basic guideline is to drink at least four litres of juice per day. All juices need to be as fresh as possible.

It turned out that I personally needed at least 5.5 to 6 litres of juice every day to meet my energy requirements. All fibre was removed from the juices; I sieved even my orange juice. The reason for that was mostly educational. It was to realise that what was coming out in the bowel movements was not the fibre from the juices. 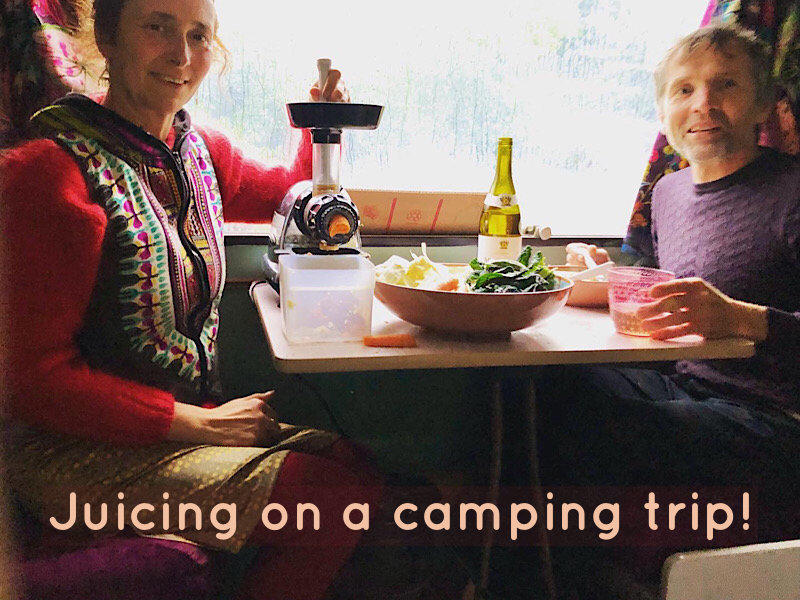 My most favorite juices were:

greens from the greenhouse with pineapple 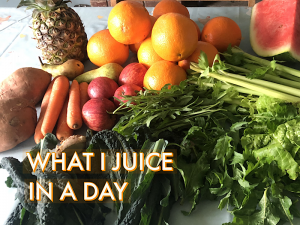 I have to mention this. Your bowel movements start to dominate your life on a juice fast. Different foods we eat have a different bowel transit time. For example, fruits go though us very fast, 6 – 12hours. Vegetables are slower.. grains, dairy, meat can take days, weeks, months. The slower the transit time, the more disease-causing toxins get released into our bodies. Even though I had a very healthy diet by standards of others, my solid bowel movements never stopped coming throughout the fast. By the decomposing smell and appearance, I knew it was old stuff coming out.. I will spare you the details.

It was truly shocking to realise how much I had inside of me. I lost 7kg in the 2 months and I wonder how much of it was actually old waste.. 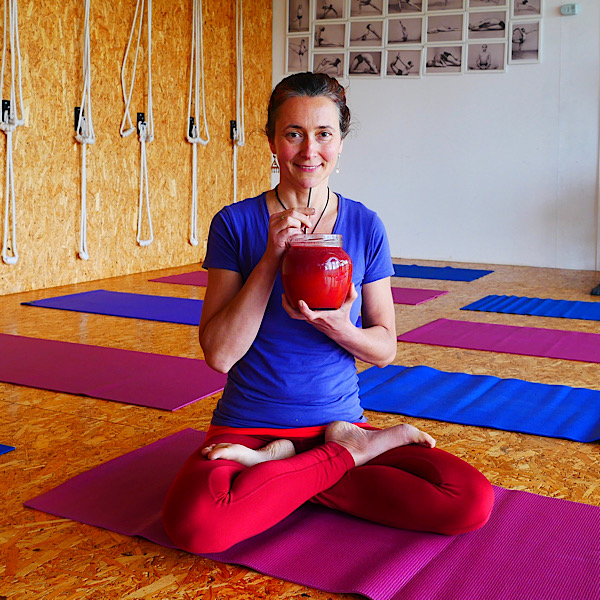 The first week was difficult. I knew it would be. At the start I planned to do all my juicing for the day each morning. It was taking me about 2h and standing at the juicer for so long each day was frustrating to say the least! Luckily I mostly work from home, so I started to divide the juicing into 3 parts as 3 meals per day and that made much more sense.

I was cold. Very cold. The sunshine I was hoping for did not materialise.
And I was hungry..

On day 4 of my juice fast there was a party. I wasn’t feeling great on that day, my mood was low, I felt ungrounded and hungry. Nevertheless, I prepared my 2l of juice and off I went.
It was challenging. We were in a cold building, there was lots of food and everyone except me was enjoying their curries, while I sipped my beetroot juice and shivered. As the night progressed, there was live entertainment. The lady singing had a lovely voice but I was so sensitive, that the high pitched sounds started to make me queezy. Without saying a word, I quietly escaped the party.

And that was the low point of my juice fast.

Oh wait… there was another. I will spare you the details.

Let’s just say that you should never trust a fart on a juice fast!

On day 6, I started having an intense craving for a tuna melt, something I used to love but haven’t eaten for about 10 years. I could see it, smell it, taste it. The craving lasted about 3 days. So I wondered.. was it connected to what was coming out of me at that time?

After the first 7 days it got easier, The hunger wasn’t there any more.

I slowly got into my routine of juicing and living life a bit differently.

I just avoided eating out.. 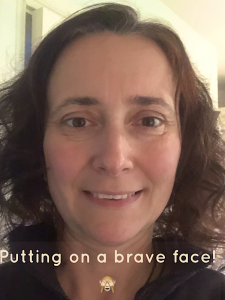 And then… I started to feel good!

On day 19 of the juice, I went to see a naturopath for a live blood test recheck and to my pleasant surprise, the candida I was riddled with only 6 weeks ago seemed to be completely gone from my blood. In fact I was told that my plasma was very clean. My energy was steadily rising, I didn’t have any bursts but it felt steady.

Around one month into the juice fast I felt full of energy, I did more in my yoga practice and I was not tired after running retreats as I normally would be. I felt great!

And I started to feel notably peaceful inside, I was more content and I was more sensitive to other people’s emotions. I naturally seemed to be able to witness when someone tried to drag me into their emotional drama and It did not affect me..

At this stage I decided to keep going to 60 days. We had plans to go to a festival, where juicing would be impossible. 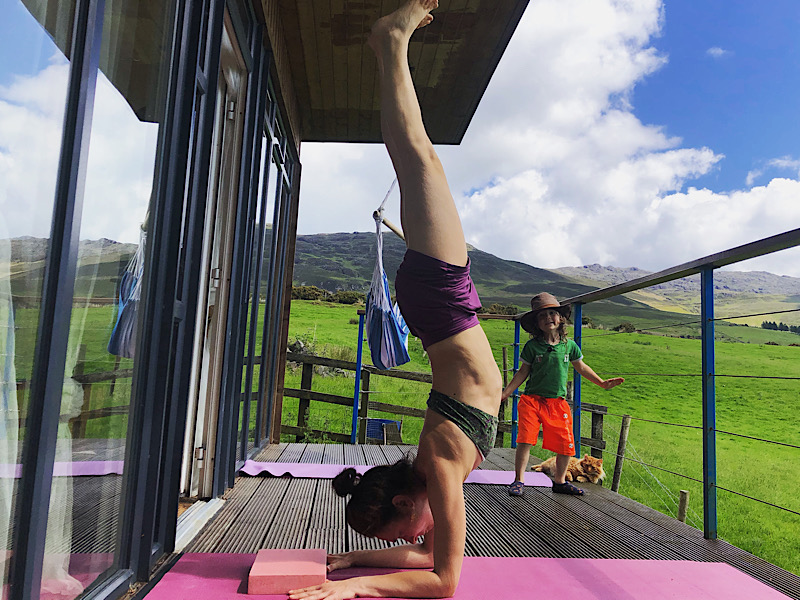 I knew that it would take me about a week to break the fast.
For every 4 days on a fast, there should be one day to break it. After 24 days of fasting and longer, it should take around a week or little longer, depending how one feels.
I followed John Rose’s protocol and my first meal were dried prunes soaked overnight.
The prunes are not just the first meal, but also – due to it’s laxative quality – chosen as a test to see if the GI tract is clean. If it was (according to the protocol), the prunes would have gone through me in an hour and half or so.
So I waited.. and nothing happened.

I did have a bowel movement, but it was the same as any other day.
To this day I wonder where the prunes went!?
I guess will just have to get back to juicing another time to go the distance! 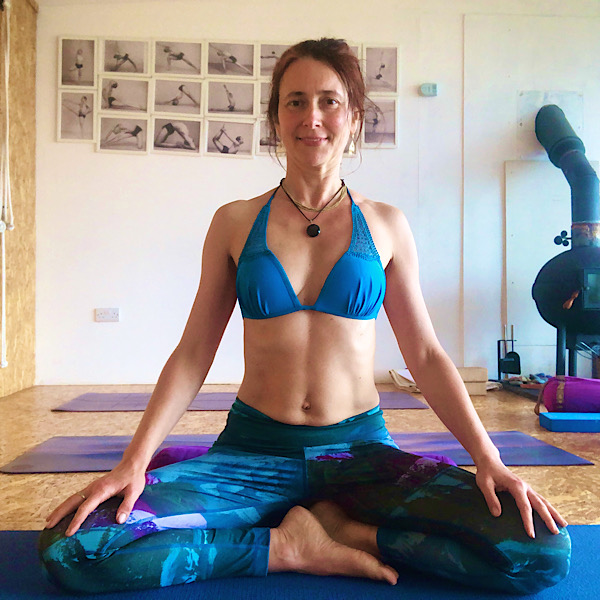